Precisely when Methodism first came to Meriden is not known. Jesse Lee, appointed as the first Methodist minister to New England in 1789, visited Wallingford in 1806. There is evidence that two small groups of Methodists were meeting in the east and west sections of the community, perhaps as early as 1800.
We use 1830 as our founding date because it was the year a Methodist meetinghouse first was built. It was a crude building, unpainted, with rough-hewn seats fashioned from sawmill slabs and without any means of heating or lighting. The cost of the building was $428.40.
When Methodism first came to New England it met considerable resistance from the more established denominations, which at that time were the Congregationalists, Baptists, and Episcopalians. The early Wesleyans were inclined to be more enthusiastic than most other Christians, and it was not unusual to hear them dismissed as “shouting Methodists” and as religious fanatics.
The records for this period suggest that 1842 witnessed a turning point in Methodist fortunes in Meriden. There was apprehension throughout America that the end of the world was at hand. In this atmosphere, Methodist revivals in the area met with increased response. During the summer the crowds so large that a large tent was pitched in an open lot between High and Broad Streets. In 1844, the first regular Methodist Society was formed, with 32 members, under the leadership of the Rev. John Parker.
For the next two decades Methodism continued to sweep across the United States until, by the time of the Civil War, it was the largest denomination in the country.
It was a $50,000 gift from Charles Parker that made possible a new Methodist Church in 1866 at its present location. Those who recall the old First Methodist Episcopal Church will remember its grandeur. Two parlors opened off from the front vestibule, and the church sanct 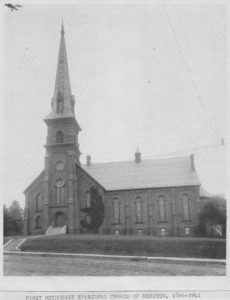 uary held more than eight hundred. In 1893 a parsonage was built at 15 Pleasant Street, which served as the home for Pastors and their families for 75 years. This residence, now our Parish House, was presented by the Rev. and Mrs. J.T. Pettee, in 1892. The Rev. Pettee never was Pastor here, but he seemed to have been an important figure in our Church at that time.
In 1912 the Rogers Memorial Building was added to our facilities, the gift of Mr. & Mrs. Rogers, under the condition that the congregation raise funds necessary to make needed repairs on the general property. The new facilities included many Sunday School rooms, offices and a library, and a full gymnasium, bowling alleys and swimming pool. Mr. Rogers was president of a small silver business. That same year he joined the First Methodist Episcopal Church.
In 1940, there was a general renovation of the Church, which included a new organ, redecoration of the sanctuary, new stained glass windows, and many other repairs. A year later, on September 19, 1941 a fire of unknown origin began on a Friday afternoon and soon the entire Church was a seething furnace. Thousands gathered to watch as the city’s fire department struggled valiantly but in vain. Considerable damage also was done to Rogers Memorial.
Worship was held at St. Paul’s Universalist Church, at the high school next door, (now an office building) and then in Rogers Memorial once repairs had been made. World War II postponed the rebuilding of the Sanctuary. On Palm Sunday, 1949 the first service was held in the new sanctuary and the building was consecrated in June. It had been erected on the same site as the old, in a strikingly simple colonial style.
The past years have seen many steps forward in the life of our Church. The musical program has been consistently outstanding. During the pastorate of John Franzen a new pipe organ was installed and the Charlotte Bristol Memorial Handbells were given. In 2001 the Handbell Choir received a three-octave set of Hand Chimes in memory of Ray & Gaynell Miles by Sylvia Miles Guerin. We obtained a new parsonage in 1970 and the old parsonage became our Parish House with offices for our Pastors and secretary, meeting rooms, and an apartment for the outside custodian. In 1980 the Church carillon was dedicated in memory of Richard Elston. The Verdin Carillon was installed in October 2006 in memory of Wayne Roth.

Meriden has changed and there have been changes in the life of the Church as well. Yet, we have the same Lord, Jesus Christ, “the same yesterday and today and forever” (Hebrews 13.8). 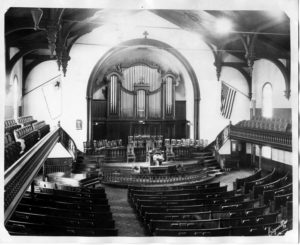